2. Amplification options for conductive and mixed hearing loss; an introduction

Nowadays, for patients with conductive hearing loss or mixed hearing loss, who need amplification, commonly used options are: 1. conventional acoustic behind-the-ear devices (BTE) or in-the-ear devices, 2. (semi-implantable) bone-conduction devices (BCD) and 3. active middle ear implants with their actuator coupled to one of the cochlear windows; these implantable devices have been described in detail elsewhere (Snik, 2011).

The three options are neither equivalent nor interchangeable with respect to medical or anatomical restrictions and their technical capacities.

While there are several practical, medical, surgical and esthetical reasons to prefer one of these technologies over another, this chapter discusses basal properties of these hearing devices, namely the maximum output capacity. Part of the following has been published before (Zwartenkot et al. 2014, Snik, 2014, van Barneveld et al. 2017).

2.2. Air-conduction versus bone-conduction hearing aids; capacity of these devices

However, when an air-bone gap is present, a significant part of the BTE output (equal to the width of the air-bone gap) is lost before the amplified signal reaches the cochlea. Then, the remaining output, to ‘compensate’ for any cochlear hearing loss component, might become low or even absent. For example, consider a patient with mixed hearing loss with an air-bone gap of 50 dB, who uses a standard rather powerful BTE. According to the documentation, the MPO of that BTE is 116 dB SPL and the maximum gain is 52 dB. Consequently, the MPO as perceived by the patient is 116-50 thus 66 dB SPL, and the maximum gain is (52-50) just 2 dB. Note that the 66 dB SPL equals the overall sound pressure level of normal speech. Louder sounds cannot be processed properly. Therefore, when applying BTEs in mixed hearing loss, only the most powerful BTEs should be considered and, if the air-bone gap is large, benefit might be limited.

Figure 2.2. A conventional transcutaneous BCD. The driver is a standard powerful BTE connected to a bone-conduction transducer, worn contralaterally. The headband has to keep the transducer in place (behind the pinna) and to push the transducer against the skin with the required static pressure to enable the best transcutaneous transmission. Source: Internet

A new, more effective BCD has been developed in the mid 1980s (Hakansson et al., 1984). This so-called Baha device comprises an externally worn processor with electronics and the actuator that is coupled to the skull by means of a skin-penetrating implant, anchored in the skull bone (see Figure 2.3). As shown by Hakansson et al. (1984) this ‘percutaneous’ bone-conduction route is approximately 15 dB more efficient than the transcutaneous route, owing to the absence of the attenuating skin and subcutaneous layers.

Combining Hakansson et al.’s finding with that of Skoda-Türk and Welleschik suggests that the percutaneous route is only 35 dB (50-15 dB) less effective than the air-conduction route. This implies that if a hearing-impaired subject has an air-bone gap of 35 dB, a BTE and a Baha might be equally effective. Furthermore, the Baha will be the most effective device for patients with an air-bone gap exceeding 35 dB while the BTE might be more effective than Baha if the air-bone gap is below 35 dB. Indeed, de Wolf et al. (2011) showed that this theoretical “cross-over” point exists. 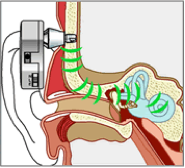 Figure 2.3. The Bone-anchored hearing aid or Baha with its transducer (in the housing) connected solidly to the skull via a titanium percutaneous implant. Source: Cochlear Company

2.3 The maximum output of bone-conduction hearing implants and other implantable amplification options

It should be noted that BTEs cannot be used by patients with hearing impairment caused by aural atresia or chronically discharging ears (see Chapter 5). Then, amongst others, percutaneous BCDs remain. Carlsson and Hakansson (1997) studied the gain and MPO of the Baha (standard type HC200) and showed that the MPO was 100, 112, 102, 95 dB FL (decibel force level) at 0.5, 1, 2 and 4 kHz, respectively, as measured on a skull simulator. These data can be expressed in dB HL, using the so-called RETFLdbc (Reference Ear to Force Level for direct bone conduction; Carlsson and Hakansson, 1997), resulting in MPOs of 53, 66, 78, 69 dB HL, respectively. Thus, in dB HL, the mean MPO of the standard Baha is approximately 67 dB HL. Carlson and Hakansson also studied the noise floor of that Baha, which was reported as inaudible. These measurements have been reproduced and extended using other types of Baha (e.g. Baha Divino, BP100) by Zwartenkot et al. (2014). Actually, Zwartenkot et al. measured objectively the MPO of several devices for patients with conductive or mixed hearing loss and expressed the MPO in dB HL. During all their measurements, devices were used with their output unlimited and with all adaptive systems deactivated. They also studied the Ponto percutaneous BCD (Oticon Medical, Sweden), a competitor of Baha. Table 2.1 presents their results.

Figure 2.4. The Sophono Alpha 1 device. The device is worn externally, coupled to the skull transcutaneously by coupling magnets; a (double) magnet is implanted under a closed skin. The footplate of the externally worn processor also contains such a magnet. Source: Internet

Table 2.1. Objective measurement of the MPO of several hearing devices

In the late nineties, a more powerful Baha was developed, the Baha Cordelle, which comprised a body-worn powerful amplifier that made this device the most powerful percutaneous BCD on the market for many years. The Baha Cordelle was approximately 10 dB louder than the standard Baha (Bosman et al., 2006); indeed a MPO of 80 dB HL was reported, see Table 2.1 (Zwartenkot et al., 2014). Recently (early 2017), two other super power percutaneous BCDs have been released, namely the Baha 5 Superpower (Bosman et al., 2018a) and the Ponto 3 SuperPower (Bosman et al., 2018a). The Baha 5SP (Super Power) is the most powerful BCD with a MPO of 85db. 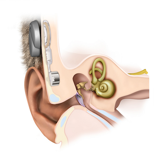 Figure 2.5. The Bonebridge device; an active transcutaneous BCD with its actuator implanted in the mastoid area. The actuator is driven by an externally worn audioprocessor. Source: Internet

In 2013, the first active transcutaneous device has been released, the Bonebridge, see Figure 2.5 (e.g. Huber et al., 2013). Mertens et al. (2014) measured the MPO of the Bonebridge according to the protocol described by Zwartenkot et al. (2014) and reported a value of 65 dB HL, close to that of the standard percutaneous Baha/Ponto device. That conclusion, namely that the standard Baha and Bonebridge have comparable capacity was also drawn by Huber et al. (2013), using Laser-Doppler measurements in implanted cadaver heads.

In short, four subtypes of BCDs can be distinguished (Rheinfeldt et al, 2015);

In 2006, Colletti and co-workers published a paper on coupling of the actuator of the Vibrant Soundbridge middle ear implant (VSB; active middle ear implant) directly to one of the cochlear windows for patients with conductive or mixed hearing loss (Colletti et al., 2006). Figure 2.6 shows the VSB in its classic application with its actuator (FMT; floating mass transducer) connected to the intact ossicular chain (to the incus) enabling the FMT to move in parallel to the stapes. The MPO of that classic VSB application, developed for patients with pure sensorineural hearing loss, was 102 dB HL (mean value at 1, 2 and 3 kHz; Snik et al., 2004). The right-hand part of Figure 2.6 shows the FMT in its alternative position, coupled to the round window of the cochlea, according to Colletti et al. Options to couple the FMT to the oval window have also been described (Venail et al., 2007; Shimizu et al., 2011). The measured MPO value with these adapted VSB devices for application in conductive and mixed hearing loss proved to be variable, between 65 dB HL and 88 dB HL (Zwartenkot et al., 2014). This variability is probably owing to the variable effectiveness of the individual coupling of the actuator to the cochlea (Shimizu et al., 2011). As an estimate, ignoring Zwartenkot et al.’s two cases with probably a poor coupling, a MPO of 80-88 dB HL was reported (see Table 2.1).

More recently, first results have been published with another middle ear implant for patients with conductive or mixed hearing loss, the Otologics MET, or, since November 2014, the Cochlear MET. The Otologics MET applied in patients with pure sensorineural hearing loss, had a mean MPO of 111 dB HL, thus higher than the VSB (Snik et al., 2004). The MET’s actuator is surgically placed and fixed in the mastoid area and its movements are transmitted to the incus by means of a solid connection. Other coupling options for application in ears with disrupted ossicular chain have been developed. First results are promising (Deveze et al., 2015; Busch et al. 2016). So far, MPO measurements have not been performed.

With the Codacs device (e.g. Lenarz et al., 2013), developed for patients with otosclerosis, the MPO could not be determined as it exceeded in all cases the patients’ LDLs (Zwartenkot et al., 2014). Thus the Codacs was the only device that enabled full utilization of the patient’s dynamic range of hearing; from the cochlear thresholds up to LDLs. 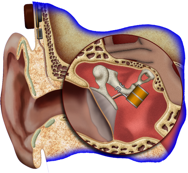 Middle ear implants, developed for patients with sensorineural hearing loss, such as the VSB and MET, can be applied in conductive and mixed hearing loss. MPO might be higher than for bone-conduction devices, depending on the quality of the coupling between actuator and the cochlea.