3. Basic considerations; the effect of low MPO on gain

What is the effect of a relatively low MPO? Figure 3.1 shows the audiogram of a patient with conductive hearing loss. Cochlear thresholds and LDLs, according to Dillon and Storey (1998), are indicated in Figure 3.1B. 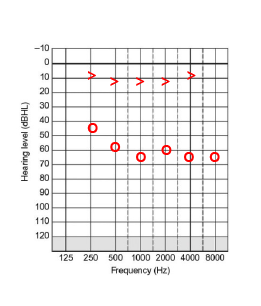 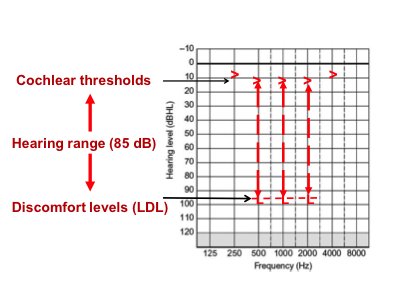 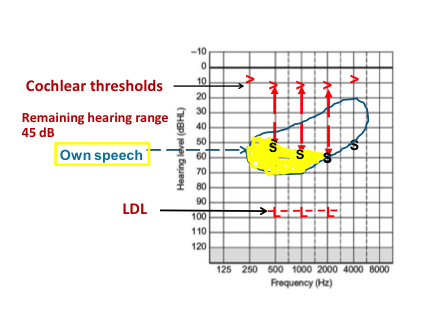 Figure 3.1. Figure A ( upper left) shows the audiogram; figure B (upper, right) present the cochlear thresholds and the LDLs (Dillon & Storey, 1998). Figure C (lower figure) shows the MPO values (labelled with ‘S’) of the applied transcutaneous device. These MPO values split the patient’s dynamic range of hearing into two parts; an audible part (of 45 dB, see vertical red arrows) and a second unused part because it cannot be addressed by the device (40 dB). The speech area of the patient’s own voice is schematically indicated, with the yellow part being ‘inaudible’. Gain of the device was 0 (closed air-bone gap), thus an environmental sound of 40 dB HL was perceived as a sound of 40 dB HL.

The patient’s dynamic range of hearing, by definition, the difference between the cochlear threshold and LDLs, reduces by approximately 50% if a conventional transcutaneous device is being used (MPO typically of 55 dB HL, indicated by the symbol S in the figure). This might be troublesome: e.g. the louder part of speech produced by the patient’s own voice, is 70 dB HL at ear level. With a gain of 0 (air-bone gap closed), the patient hears that 70 dB HL only as 55 dB HL owing to the low MPO of that device. Such a saturation caused by the MPO leads to distortions. The yellow area shows the part of the speech sounds that cannot be processed properly. Patients can prevent distortions, by turning down the volume (gain). For instance, in this case, the reduction in gain might be 20 dB. In that way, the louder part of their own voice (yellow area) that range from 50 to 70 dB HL will be perceived as 30 to 50 dB HL, what fits nicely in the patient’s aided dynamic range of hearing. However, that 20 dB attenuation (negative gain) negatively affects speech perception of someone else, speaking at normal conversational levels. Note that in the sound-field audiogram such a ‘negative gain’ of 20 dB shows up as a remaining air-bone gap of 20 dB. This example shows that it is better to use a device with a high MPO, even in patients with a (sub)normal sensorineural hearing loss component.

The choice for a ‘negative gain’ to deal with a relatively low MPO, proved to be a general observation amongst patients using transcutaneous and percutaneous BCDs but also using the Bonebridge device and the VSB device with actuator coupled to the cochlea (see last part of this paragraph).

The next question is: how do patients with varying degrees of cochlear hearing loss (component) set the gain of a device with limited MPO? This question was answered with the help of our Baha database by re-examined the data of 89 patients using Baha devices (Snik et al., 2004). At that time, Baha devices with (predominantly) linear amplification were used (Baha Compact, Classic, HC220, Cordelle) and with a volume wheel that enabled the patients to choose their preferred gain. The patients’ cochlear thresholds or their sensorineural hearing loss components or SNHLc was flat or mildly sloping. 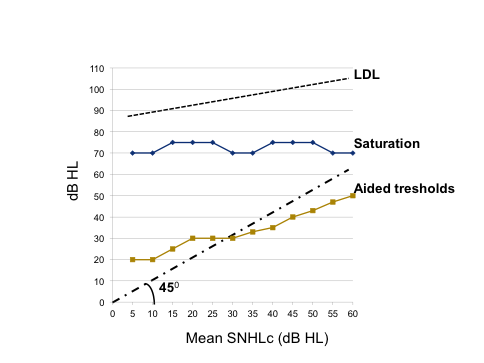 Figure 3.2 presents the mean aided thresholds (0.5, 1 and 2 kHz) as a function of the mean SNHLc (sensorineural hearing loss component; same frequencies). For clarity, individual data of the 89 Baha users were grouped into 12 classes of 5 dB each (Snik, 2014). To assess the gain (amplification), the unaided thresholds are indicated being the diagonal dotted line.

Figure 3.2 shows that patients with (sub)normal cochlear function (low mean SNHLc) set the volume of their Baha such that the gain is negative: aided thresholds are worse (higher) than the unaided threshold. This results in a remaining air-bone gap of around 10 dB, which is seen for SNHLc values up to 25 dB HL.

Patients with more severe SNHLc need positive gain to hear others speak which, according to Figure 3.2, is found for SNHLc > 30 dB HL. At 30 dB HL, the mean aided threshold equals the mean SNHLc (data point on the diagonal).

It should be noted that with increasing mean SNHLc, more and more patients used powerful Baha devices (Snik, 2014). Per patient, the type of Baha device used was documnted and thus its MPO, which was used to obtain the input level at saturation (input level at which the MPO was reached). This specific input level is the MPO value minus the gain of the device (output = input + gain). The gain is easily obtained by subtracting the aided thresholds from the unaided cochlear thresholds. The thus calculated (individual) input levels at which the Baha devices saturated, grouped in the 12 classes, are presented in Figure 3.2 as the blue line, labelled ‘saturation’. The figure shows that the input level at saturation restricts the aided dynamic range of hearing significantly. Before discussing the consequences, Figure 3.2 was redrawn, see Figure 3.2bis. 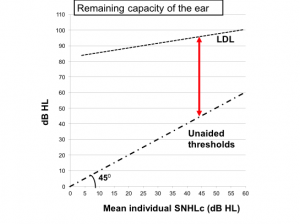 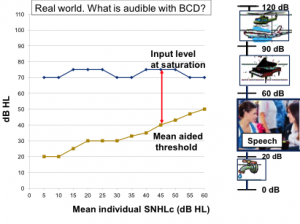 The left graph of Figure 3.2bis shows the capacity of ear of patients with SNHLc between 0 and 60 dB HL. The diagonal line presents the unaided thresholds while the dotted line, labelled LDL, presents the patient’s LDL according to Dillon and Storey (1998). The right graph shows the aided situation after Baha fitting, taken from Figure 3.2. The difference between aided thresholds and input level at saturation is the patient’s aided dynamic range of hearing or his auditory window to the world.

The right-side subfigure presents schematically the real auditory world. Let us consider conversational speech. The level of normal conversational speech fluctuates between 25 dB HL and 55 dB HL (indicated in the subfigure, right-hand side; according to Killion & Christensen, 1998). Combining the right-side subfigure and the right-hand graph shows that in the present patient group, the 30 dB speech range is only fully audible when the mean SNHLc is 15 dB or less, while at a mean SNHLc of 60 dB HL, the audible proportion of speech has reduced to just 5 dB HL.

Furthermore, we learn from Figure 3.2 that the patients, irrespective of their mean SNHLc, set the volume of their device such that the device saturates at input sound pressure levels of 70-75 dB HL, not lower. Indeed, this choice does enable undistorted perception of even the loudest parts of normal conversational speech. So, the figure suggests that the patients in this study don’t compromise with regard to the input level at saturation, but, consequently, they do compromise with regard to the softest speech sounds that they can hear.

As indicated before, the basic rule for desired gain in pure sensorineural hearing loss is approximately half that hearing loss. With regard to the SNHLc, as the figure shows, that is not accomplished at all. E.g. at a mean SNHLc of 45 dB HL, gain is only 7 dB (see Figure 3.2). The limited MPO plays an important, probably decisive role in the low gain settings, but other factors, as suggested in the introduction, cannot be excluded yet.

Figure 3.3 also shows aided threshold data, however, not only for the Baha device but also for the Ponto device, Bonebridge device and VSB device. Data from studies published between 2006 and 2013 were included. Using Pubmed, search terms were the commercial names of the devices (concerning Baha with the additions: BP100, BP110, Intenso and Cordelle). Inclusion criteria were: studies in patients with conductive or mixed loss, unilateral implanted and individual data should be presented or group data with standard deviations. Exclusion criteria: studies with five or less patients and phase 1 or 2 experimental studies. Twenty-four studies fulfilled the criteria. Figure 3.3 presents per study the mean aided threshold at 0.5, 1, 2 and 4 kHz as a function of the mean cochlear threshold, SNHLc, averaged over the same frequencies. These data show that when the SNHLc is below 30 dB HL, ‘negative gain’ (thus an air-bone gap) is seen, as in Figure 3.2. Note that a dot on the (450) diagonal line means that the air-bone gap is just closed (aided threshold equals the cochlear threshold). Figure 3.3 further suggests that in most studies, patients were under-fitted (non-closed air-bone gap). The different types of devices show comparable results. Clearly, the trend in Figure 3.3 is the same as that seen in Figure 3.2. Again, the basic rule for amplification in sensorineural hearing loss (compensate approximately half of the SNHLc) has not been accomplished for any of these studies.

Note that, the wide vertical spread suggests significant differences (up to 15 dB) between studies/clinics; to obtain more uniform results, standardized procedures are needed for fitting such hearing devices. 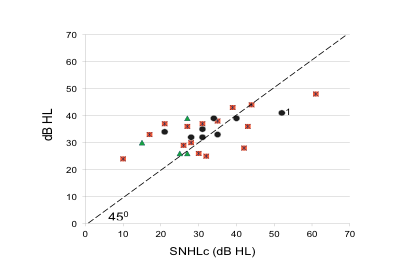 Figure 3.3. Mean aided threshold (0.5, 1, 2, 4 kHz) as a function of the mean SNHLc as obtained from 24 studies using either the Baha or Ponto device (black dots), the VSB device (red squares) or the Bonebridge device (green triangles)

To find the most relevant studies it was decided, first of all, to use studies that had been selected before by authors who published systematic reviews. This concerned reviews by Colquitt et al., 2011; Verhaert et al., 2013; Nadaraja et al., 2013; Ernst et al., 2016; Sprinzl and Wolf-Mangele, 2016 and Dimitriades et al., 2016. Only those studies were re-considered that presented audiometric data; air- and bone-conduction thresholds as well as aided sound-field thresholds. Duplicates were removed as well as studies with five patients or less, studies published before 2006 and unpublished presentations.

Altogether, 48 studies were included in this analysis. Figure 3.3.b presents per study the mean aided threshold at 0.5, 1, 2 and 4 kHz as a function of the mean cochlear threshold, SNHLc, averaged over the same frequencies. Again, this figure shows that, generally, when the SNHLc is below 25-30 dB HL, a remaining air-bone gap (data points above the diagonal) is found. Figure 3.3.b shows poor and variable results between studies, even worse than those of Figure 3.3.

Figure 3.3.c presents the same data as Figure 3.3.b; this time, trend-curves are presented, drawn by eye through data points for a particular device. Considering the bleu line, representing the trend for VSB, aided thresholds are at a rather stable level (25-30 dB HL) up to a SNHLc of approx. 45 dB HL. Above that value, aided thresholds seem to deteriorate exponentially, indicating that the device is no longer powerful enough for such degrees of the SNHLc. For the Baha Attract and Sophono devices, similar trends are seen, however, with lower cut-off SNHLc value, in between 15 and 20 dB HL. Obviously, these different types of devices are not equivalents, which conclusion is in line with the objective MPO data, presented in Table 2.1.

For Baha/Ponto devices, no clear cut-off value for SNHLc is found. This is caused by the availability of several processors with increasing power, which are progressively applied in patients with more severe SNHLc.

Even taking this device-related limitation into account, an obvious variation between studies is still present. This suggests that well-defined fitting procedures are needed. Chapter 4 elaborates on this issue, based on a frequency specific analysis of the data of included studies. As Figure 3.3 shows more consistent data than Figure 3.3.b, the attempt to formulate targets for proper amplification will be based on the 24 studies underlying Figure 3.3. 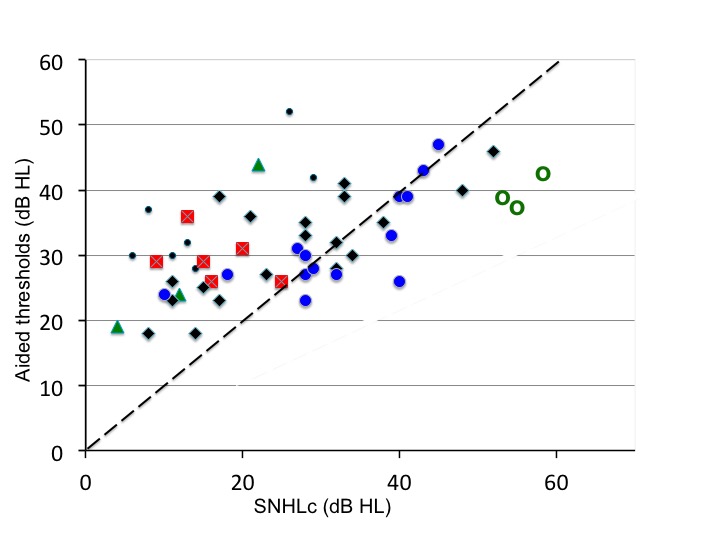 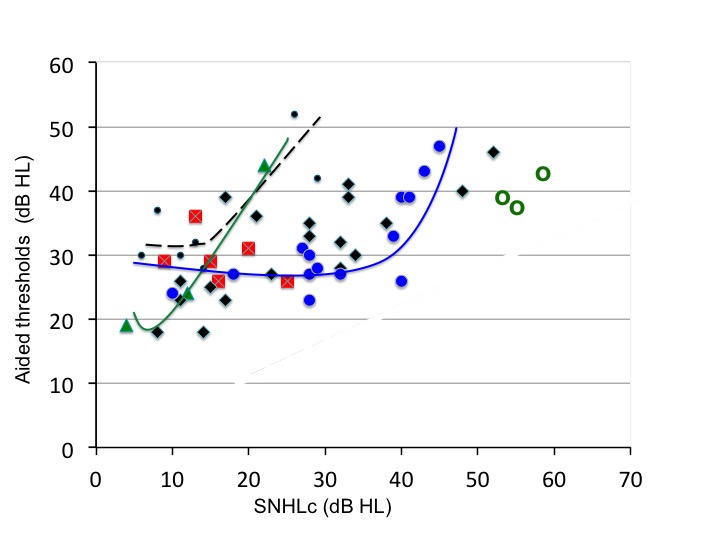 Figure 3.3.c. The same figure as Figure 3.3.b, however, this time trend lines are indicated for the VSB data points and the passive transcutaneous BCD data points