To rehabilitate sensorineural hearing loss, conventional air-conduction hearing aids are the first choice (e.g. behind-the-ear devices or BTEs; Figure 2.1, chapter 2). If the sensorineural hearing loss is not too severe, it is possible to make conversational speech audible again with BTEs. However, speech recognition might still be compromised, especially in noisy situations, despite appropriate amplification owing to the associated deprived processing of speech cues in the cochlea (referred to as cochlear distortion; Plomp, 1978). Today’s digital devices might deal with that; algorithms have been developed that might enhance speech sounds relative to noise, like noise reduction algorithms and adaptive directionality of the microphone (Dillon, 2012).

For patient with severe to profound sensorineural hearing loss (>70-80 dB HL), BTEs might no longer be sufficiently effective because proper restoration of the audibility of speech is not possible and/or because of significant cochlear distortions. Then, cochlear implantation becomes the next treatment option (Hoppe et al., 2015; Huinck et al., 2019). The 70-80 dB HL limit is based on speech recognition tests; above that limit, word score is probably significantly better with a cochlear implant than with a BTE.

An alternative amplification option for patients with a hearing loss below 70-80 dB HL is an (acoustic) auditory implant (Verhaegen et al., 2008). High sound fidelity, high output with less feedback problems and no occluding earmolds were claimed advantages of such auditory implants over BTEs (e.g. Goode, 1995). Since the late nineties, several different types of auditory implants have been introduced for patients with sensorineural hearing loss (Snik, 2011). Nowadays (end 2020), only two semi-implantable devices are still on the market, viz. the Vibrant Soundbridge (VSB; Figure 2.6, chapter 2) and the Maxum device (Ototronix, USA; Pelosi et al., 2014). The latter device comprises a permanent magnet connected surgically to the stapes, in the middle ear. The driver is an electro-magnetic coil placed in a deep fitted in-the-ear hearing aid. Early 2020, the competitor of the VSB, the semi-implantable Cochlear MET device, was taken off the market.

In addition to semi-implantable devices, one fully implantable device is on the market, namely the Esteem device (Envoy Medical, St. Paul, MN, USA; Marzo et al., 2014). Another fully implantable device was the Cochlear Carina, which also was withdrawn from the market early 2020. Rather recently, several systematic reviews were published aiming at the claimed advantages of auditory implants over BTEs. Pulcherio et al. (2014) concluded that, comparing the Carina and Esteem devices to BTEs, no structural audiological benefit was found. As these implantable devices are expensive and involve implant surgery and regularly revision surgery (every 5-10 years, to replace the battery), the cost-benefit ratio of these devices is unfavorable compared to BTEs. Another review by Kahue et al. (2014), comparing published audiological outcomes obtained with middle ear implants (including the VSB and Maxum devices) and BTEs, concluded that a surplus value of the middle ear implants could not be established. Since these reviews were published, screening the literature, just one more clinical trial was found with the Maxum device as well as one with regard to the Esteem device, published by company-independent research groups. Barbara et al. (2018b) reported on 3 patients using the Maxum device; compared to BTEs, two patients had equal speech recognition scores and the third patient had a 10% higher word score with the Maxum device. Regarding the Esteem device, Barbara et al (2018a) published an overview of their outcomes. The patient group described in this paper overlapped with that of a previous paper of the same authors, which was included in the above-mentioned systematic reviews by Kahue et al. and Pulcherio et al.

It might be concluded that compared to BTEs, today’s middle ear implants have no convincing audiological advantages, except for patients who don’t tolerate the earmold of BTEs owing to e.g. external otitis (consensus statement, see Magnan et al., 2005). The recent systematic reviews indicate that that statement remains valid. Some manufacturers of middle ear implants refer to that conclusion (e.g. VSB fact sheet, 2015). Edfelt et al. (2014) showed that for such patients the application of the VSB device is (even) cost effective. Note that according to the set-up of the Maxum device, it is not an option for patients with external otitis. No papers could be identified on the Esteem device applied in patients with external otitis. In contrast, the VSB device is widely applied.

To help patients with sensorineural hearing loss and chronic external otitis, bone-conduction devices (BCD) have been applied as well; with a BCD, the ear canal remains open. Bone conduction works but it is not really effective (see Chapter 2). Indeed, studies with the most powerful type of BCD, the percutaneous BCD (Baha), applied in such patients showed insufficient amplification (Snik et al., 1995). Stenfelt et al. (2000) studied the use of Baha in patients with an another reason, namely in patients with a predominant high-frequency sensorineural hearing loss, enabling an open-ear fitting. They also concluded that Baha was not powerful enough. No papers were found on the effectiveness of today’s more powerful BCDs (e.g. the percutaneous super power devices) in such patients.

To help patients with sensorineural hearing loss in need for amplification, bone-conduction devices have insufficient power

In contrast to the Maxum and Envoy Esteem devices, the VSB has been widely applied. With the more recent sound processors (Amade or Samba for VSB), improvements in sound quality have been achieved compared to the older processors. Concerning speech recognition, Figure 8.2 shows the %-correct score at normal conversational level (65 dB SPL) of 14 patients using these updated VSB processors. Patients with ski-slope audiograms were excluded, following Verhaegen et al., 2008. The drawn lines are taken from that latter study, based on the speech performance of patients with previous-generation sound processors. The figure shows that the new data points are close to the line or somewhat better (line taken from Verhaegen et al.). Busch et al. (2016) reported a similar conclusion. As a reference, Verhaegen et al showed that with BTE, applied in patients with similar hearing loss, the mean speech score was higher, e.g. at 65 dB HL the mean phoneme score was 90% with BTE versus 70% with VSB. 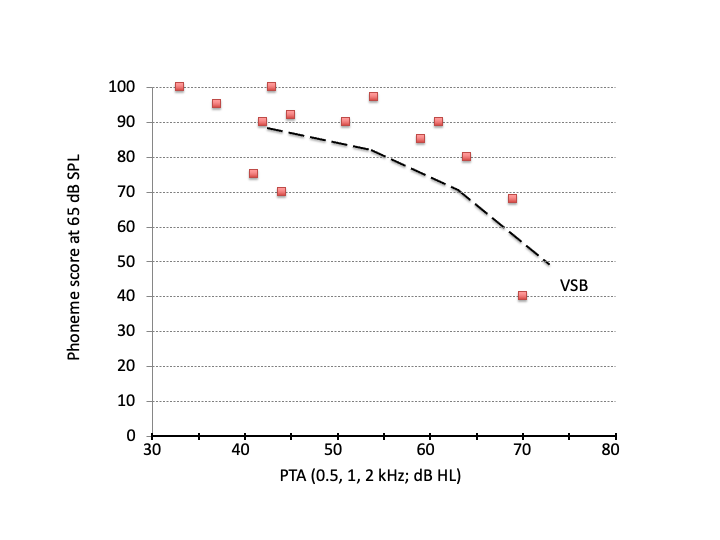 A problem of using auditory implants with an open ear canal, like the VSB, might be interference between the vibrations of the middle ear ossicles generated by the implant’s actuator and direct sounds that activate the ossicles in the normal way. It should be noted that owing to the digitally processing of digital audio processors, the amplified sounds are delayed, typically by 4 ms to 10 ms. That implies that the direct and processed sounds are not in phase for most frequencies, leading to a distorted sound. This phenomenon also occurs when fitting digital BTE devices with open earmolds (Groth & Sondergaard (2004) and Stone et al. (2008)). The latter study showed that the (annoying) interference depends on (and can be adjusted by) the gain level of the device, compression settings and on frequency. The lower the processing delay, the better. Studies looking into this interference when using middle ear implants have not been published yet.