The Baha bone-conduction device (BCD) was developed in the eighties for patients with conductive and mixed hearing loss. When this device is percutaneously coupled, the BCD is a powerful hearing solution (see Chapters 2 and 3, this website) and is generally considered as the gold standard. However, in a number of patients, problems occurred with the skin around the percutaneous implant. Although well manageable in adults (Chapter 5, this website) this has lead to revision surgeries, most frequently in children.

Therefore, new transcutaneously coupled BCDs have been developed (Sophono, Attract). These devices are attached with a magnetic coupling instead of a percutaneous one, with one magnet implanted, connected to the skull. The advantage is that the skin remains intact, however, the price that has to be paid is decreased efficiency of approx. 15 dB, owing to damping of the BCD’s vibrations by skin and subcutaneous layers. The first device on the market was the Otomag device, developed by Siegert et al. Since 2009 this device is known as the Sophono device (Medtronic, Boulder, US). The Baha Attract, introduced 4 years later, uses the same type of coupling (Cochlear BAS, Gothenburg, Sweden; see Chapters 2,3).

Cedars et al. (2016) published a well-documented paper entitled ‘Conversion of traditional osseointegrated bone-anchored hearing aids to the Baha Attract in four paediatric patients’ (2016). That paper was discussed before (Snik, 2017). The reason for the conversion was medical problems ascribed to the percutaneous coupling. Their Figure 5 showed that owing to the conversion, the aided thresholds worsened by 10 to 20 dB. That is quite a high price. Firstly, let us consider the aided thresholds of the child (number 4) with bilateral conductive hearing loss. Using the aided thresholds (data from Figure 5, Cedars et al.), the audibility of speech can be assessed as well as the expected word recognition score, see Figure 1, below. The count-the-dots approach was used (Mueller & Killion, 1991) resulting in an audibility index of 0.78 and 0.35, for the original percutaneous application and the new transcutaneous application, respectively. The related word recognition score can be determined using that audibility index, and is 95% when fitted with a BCD and 60% when fitted with the Attract. Adults with good linguistic skills might be able to deal with deterioration from 95% to 60%, but for children, who need to develop speech and language, it is problematic. 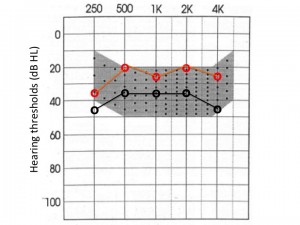 Figure 1. The aided thresholds obtained with, in red, the percutaneous BCD and in black, the transcutaneous BCD. The grey area presents the speech area, taken from Mueller & Killion (1990). The audibility index can be determined by counting the dots in the grey area (max. is 100) and divide it by 100

BCDs are also applied in patients with single-sided deafness (SSD). If someone is talking at the deaf side, it is poorly understood owing to acoustic head shadow. This is a high frequency phenomenon; attenuation is approx. 5 dB in the low frequencies and around 10-15 dB, up to 3-4 kHz. Above that frequency, increased attenuation is found, exceeding 25 dB HL at 4-6 kHz (see the classical data of Shaw, 1974). To deal with this, amongst others, a CROS-BCD can be applied. The BCD is placed at the deaf side and works as a transcranial CROS device (e.g. Hougaard et al., 2017).
However, with a transcutaneous CROS-BCD, owing to dampening of the vibrations by the skin and subcutaneous layers, especially in the high frequencies, effective CROS stimulation might be low. Cedars et al. presented data of 3 children with SSD (patients 1 to 3; owing to incomplete data only the results of patients 1 and 2 are discussed) who were using a percutaneous CROS-BCD that was replaced by a transcutaneous one. To obtain CROS-aided thresholds, the normal hearing ear was blocked during the measurements.
Figure 2 shows the original CROS-aided thresholds minus the air-conduction thresholds (normal hearing ear) for the transcutaneous (full lines) and the percutaneous CROS device (broken lines), presented as a function of frequency. Within these two patients an obvious difference is seen between the devices. Attenuation is seen especially with the transcutaneous CROS. That attenuation is worse than the attenuation caused by head shadow, using Shaw’s data (the blue line); in other words, when stimuli are presented at the impaired side, unaided thresholds are better than transcutaneous CROS aided thresholds. The Figure indicates that for these two patients, the application of the transcutaneous CROS-BCD is not an effective solution, in contrast to the percutaneous application (although, unfortunately, information above 4 kHz is missing). 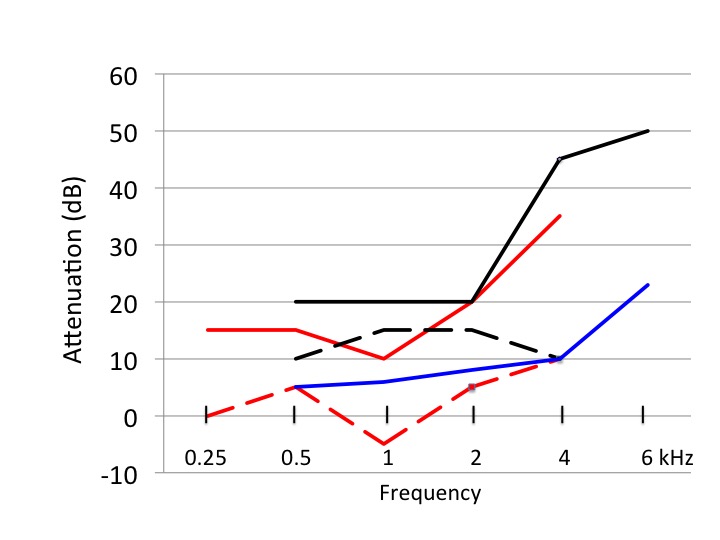 Figure 2. Attenuation caused by head shadow (in blue, according to Shaw, 1974), the attenuation of the percutaneous CROS-BCD (broken lines) and transcutaneous CROS-BCD (full lines) of the two patients (P1 in red and P3 in black) calculated from Figure 5, Cedars et al. (2016)

In summary, indeed problems with the skin around a percutaneous implant are recurrent and annoying. The 12 reported clinical visits for patient 4 in Cedar et al. (2016) might obviously be worrying and upsetting for both the child and the parents. However, according to the review above, in audiological terms, a transcutaneous solution is a major step backwards. Furthermore, transcutaneous BCDs are not free of medical complications either (e.g. Cedars et al., 2016).

The search for the best bone-conduction device, especially for children, should be continued; the options are 1) usage of percutaneous BCDs with more skin-friendly implants, better implantation procedures and improved after care, 2) transcutaneous BCDs with significantly more powerful (and feedback-free) processors.

Appendix.
It should be noted that using aided thresholds to assess the performance (gain) of a device is not straightforward if non-linear amplification is applied (see appendix 2, this website). Whether or not non-linear amplification was used in the reviewed studies was not reported. With regard to the Hougaard et al. data, it seems that amplification was linear, which is concluded from the fact that the reported ‘gain’ derived from free-field tone thresholds (19.8 dB), was comparable to the gain derived from the ‘supra-threshold’ speech reception thresholds (estimated from their Figure 4b), being 20 dB. That is indicative for linear amplification. Such an analysis was not possible with the data of Cedars et al., as supra threshold measures were lacking.