To rehabilitate patients with mixed hearing loss, implantable devices like the Vibrant Soundbridge middle ear implant (VSB) or percutaneous bone conductors (BCDs) have been applied. Such implantable devices become the next option whenever conventional hearing devices (e.g. behind-the-ear device) or reconstructive surgery are not possible or probably not effective (e.g. in case of aural atresia or chronic draining ears). Using recent publications, describing clinical trails, a comparison is made between audiological outcomes obtained with either power BCDs and VSBs. Studies in patients with severe mixed hearing loss were considered only if the mean sensorineural hearing loss component was at least 35 dB HL (arbitrary choice).

Medline was used to find relevant studies, published between 2016 and early 2019. Of the 30 detected studies, 25 studies were excluded (see Materials and Methods in the appendix) and five studies remained:

Separately, for reference purposes, data obtained with the Codacs middle ear implant device were included (Lenarz et al., 2013). This device, developed for severe mixed hearing loss was on the market from 2013 until 2018. It was the most powerful middle ear implant (MEI) ever. In contrast to the other devices, the maximum power output (MPO) of the Codacs is so high that it had to be limited when applied in patients (Lenarz et al., 2013; 2014).

The Methods and Materials section is added as an appendix.

Figure 1 presents the frequency-specific gain values related to the (bone-conduction) threshold; it should be noted that a VSB with actuator coupled to the cochlea and BCDs directly stimulate the cochlea, bypassing the impaired middle ear (and thus the air-bone gap). Therefore, to assess the effectiveness of the device fitting, only the ‘effective gain’ is of importance, defined as the cochlear (bone-conduction) thresholds minus the aided thresholds (e.g. Busch et al., 2016; Snik, 2018).

The figure presents the ‘effective gain’ divided by the cochlear hearing loss, referred to as the gain-threshold (GT) ratio, plotted as a function of frequency (0.5 kHz to 4 kHz). If GT=0, it means that the aided threshold and the cochlear thresholds coincide, indicating no ‘compensation’ of the cochlear hearing loss. Regarding the VSB, the subfigure at the right shows the calculated results using Zahnert et al. (2019), Lee et al. (2017) and Busch et al. (2016), separately. As these curves show a similar trend, data were averaged after weighting for the number of patients per study. The mean VSB data in the left subfigure show the highest GT ratio at 2 kHz with roll-off in higher and lower frequencies. For the Baha 5SP, a broader frequency response is seen comparable to that of the Ponto 3SP; obviously, the latter device is less powerful (lower GT values).

The target GT ratio (0.45), according to the well-validated NAL-RP fitting procedure, is also indicated (Dillon, 2012; see also Appendix). Systematic differences are seen between the measured GT ratios and that NAL-target GT ratio, especially in the high and low frequencies.  At 2 kHz the measured values are closest to the NAL-GT target. 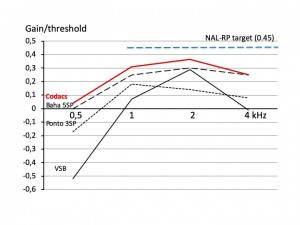 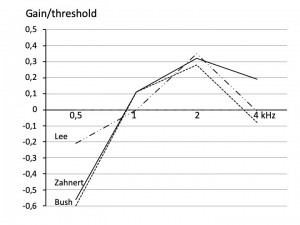 Figure 1. The gain-threshold (GT) ratio presented as a function of frequency. Results of the included studies are shown (individual data of the 3 VSB studies, presented in right subfigure, were averaged). According to the NAL-RP fitting rule, the target GT ratio is approx. 0.45 (indicated in the figure)

The NAL fitting rule is well established for sensorineural hearing loss (Dillon, 2012). However, compared to conventional behind-the-ear devices, BCDs and middle ear implants have a limited dynamic range caused by a relatively low MPO (maximal power output). Therefore, a modified, pragmatic version of the NAL fitting rule has been introduced for these implantable devices (Snik et al., 2019, see Appendix), meant primarily for validation purposes. Figure 2 shows target-aided thresholds as obtained with this pragmatic validation rule, minus the measured aided thresholds. A value of 0 means that the result is adequate according to that rule; negative values indicate insufficient gain. Mean (pooled) VSB data and, separately, the results of the Ponto 3SP study and Baha 5SP study are presented. In agreement with Figure 1, an obvious discrepancy is found at 0.5 kHz for the VSB device. The Ponto 3 SP has relatively little gain at 2 kHz.

As a reference, Codacs data are added in both figures, showing that the best resemblance is found with the Baha 5SP. 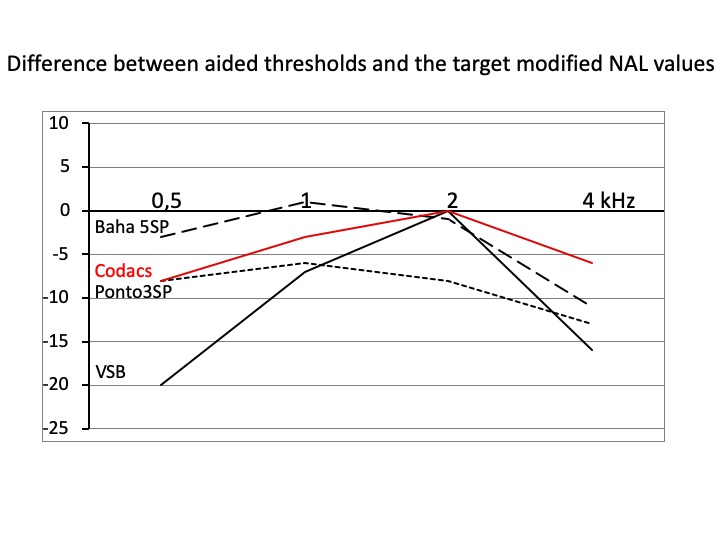 In summary, referring to Figure 2, for patients with mixed hearing loss around 35-45 dB HL, the achieved aided thresholds related to the prescribed values with either Codacs, VSB or the percutaneous Baha 5SP and Ponto 3SP are rather comparable and relatively close to prescribed values using the adaptive NAL rule (except the VSB at 0.5 kHz and the Ponto 3SP at 2 kHz). Speech recognition, a supra threshold outcome measure, is also rather comparable between systems.

It is acknowledged that the VSB outcomes depend on the efficacy of the actuator coupling to the cochlea (e.g. Busch et al., 2016). Recently, a new coupling option has been developed (Lenarz et al., 2018; Mueller et al., 2018), which has a positive effect on the frequency response of the VSB, boosting gain and output with 10-15 dB around 1 kHz.

For the percutaneous BCDs, the coupling of the processor to the skull is more or less standardized and, therefore, not a major source of variance between subjects.

To choose a device, the audiological performance is highly relevant but also of importance is the invasiveness and complexity of the surgery, medical and technical complications and its risks, longevity, cost etc. Regarding the Baha 5SP, with high volume setting, it might be advised to use the behind-the-ear processor away from the ear, with a clip connected to clothing, to deal with feed-back. That might be considered as a draw back. Regarding de application of a middle ear implant, the status and anatomy of the middle ear is of importance as it might affect effective application (e.g. Manchero et al., 2017).

Note that the conclusions drawn are valid for the present devices/processors. If more powerful processors or more effective actuators are introduced or if better coupling techniques are being developed, conclusions might change.

This review was carried out in accordance with PRISMA (Preferred Reporting Items for Systematic reviews and Meta-Analyses; Moher et al., 2009). Medline (Pubmed) was used to find relevant studies, published between 2016 and early 2019. Search string was: ((soundbridge OR ponto OR baha) AND (mixed hearing) NOT transcutaneous). Thirty manuscripts were identified; based on the abstracts, 20 manuscripts were excluded because: the focus was on cochlear implantation (1), comprised a review, no original data (5), case reports and how-we-do-it reports (4). Manuscripts dealing with medical/surgical issues (8), technical issues (1) and application in pure sensorineural hearing loss (1) were excluded as well. The full text of the remaining 10 manuscripts was reviewed. One more manuscript was excluded because the mean cochlear hearing loss was below 35 dB HL (Iwasaki et al., 2017), three manuscripts were excluded as the bone-conduction thresholds and/or aided thresholds were not presented frequency specific (essential information for the present analyses; Brkic et al., 2019; Olszewski et al., 2017; Monini et al., 2017) and one manuscript with just 5 relevant patients (Gregoire et al., 2018). Five studies were included; regarding VSB: Busch et al. (2016); Zahnert et al. (2019) and Lee et al. (2017). Regarding BCD, two studies were identified: Bosman et al. (2018) and Bosman et al. (2019). Unfortunately, Bosman et al., didn’t present the aided thresholds; these were retrieved from their database.

Table 2 gives an overview of some number of subjects per study and mean age at intervention.  For reference purposes, data obtained with the Codacs middle ear implant were included (Lenarz et al., 2013; Lenarz et al., 2014; Busch et al., 2013). This device was the most powerful middle ear implant, on the market from 2013 to 2018. Mean age of the 43 patients (of the 3 evaluative studies) was 59 years.  On the average, the patients using BCDs are older than those using the MEIs.

Note. n: number of patients; PTAbc: calculated mean bone-conduction threshold at 0.5, 1, 2, 4 kHz. Regarding the age at implantation, mean age is presented with standard deviation or the median age with range between brackets

Table 3. The mean bone-conduction thresholds (in multiples of 5 dB) per type of implant.

Given a certain hearing loss, obviously, the required ‘effective gain’ depends on the cochlear hearing thresholds (the higher the hearing loss, the higher the gain should be). Therefore, the ‘effective gain’ divided by the cochlear threshold (the gain/threshold ratio or GT ratio) is calculated; according to the widely used NAL-RP hearing aid fitting rule, this ratio should be approximately 0.45 for 1, 2 and 4 kHz, for proper amplification (Dillon, 2012).

However, for mixed hearing loss cases, that target GT ratio of 0.45 is not easily reached, owing to, amongst others, the limited highest sound level that can be produced by BCDs or VSBs (limited output), characterised by the ‘maximum power output’ or MPO of these devices. Therefore, a pragmatically adapted NAL procedure has been introduced for these implants, to be used for validation purposes (Snik et al., 2019). This pragmatic procedure was based on the NAL rule (Dillon, 2012) and optimized using data of 31 published clinical trials, regarding all types of BCDs and active middle ear implants. Consequently, this adapted NAL rule is device independent. The assumption is that appropriate (sufficiently powerful) implantable devices have been chosen (regarding the MPO) and that amplification is (predominantly) linear. In short, following the NAL fitting procedure, aided thresholds should equal 0.55 times the cochlear (bone-conduction) threshold; a margin of 5 dB was added. However, at 1, 2 and at 4 kHz the aided threshold should be 25 dB HL or less. This latter adaptation is based on the statement that, in case of (predominant) conductive hearing loss, de first 20 dB can be missed (Dillon, 2012). Regarding 0.5 kHz, following the NAL-RP rule, calculated target aided threshold is 5 dB higher than that at 1 and 2 kHz, thus an (second) additional margin of 5 dB is set for 0.5 kHz only. Table 4 shows the thus prescribed aided thresholds as a function of the cochlear hearing loss and target aided word scores as calculated assuming the target aided thresholds are reaches, while using the SII procedure (speech-intelligibility index, Killion & Mueller, 2010). 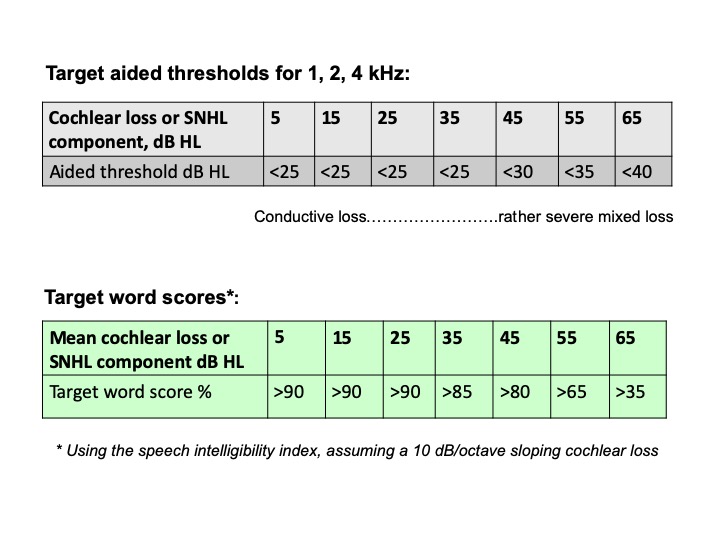 Snik AFM. Auditory implants. Where do we stand at present? 2018; http:\\www.snikimplants.nl